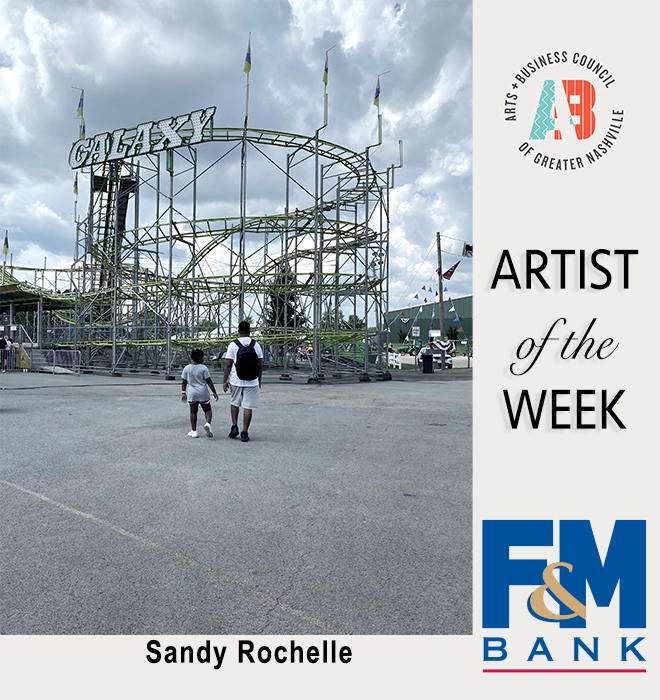 The Arts & Business Council of Greater Nashville, Blackbird Media, and F&M Bank have teamed up to present the Artist of the Week on The Nashville Sign. This week, Sandy Rochelle is featured!

As a young child and teenager, Sandy Rochelle lived on the island of Okinawa where, after receiving a camera from her parents as a birthday gift, she explored the island through her camera’s lens. That gift and the support of her parents ultimately led her to pursue a career in photojournalism, working as a staff photographer at several North Carolina newspapers before starting her own photography business.

“My photography is a product of my observations of life,” said Sandy. “Some argue if photojournalism is art? It is. I observe life around me. I Capture life without being the subject or controlling the subjects.”

Sandy has dyslexia which she says makes her feel embarrassed, but photojournalism provided her a new form of communication without embarrassment. As an only child, photography helped her to be able to sit alone, watch others, and cherish moments experienced from a distance.

“I am currently working on a long-term book project called ‘Two Hours,'” she explained. “I stay in one area for two hours and document life capturing how others interact with one another. So much can happen in one spot in two hours. Sometimes even the quiet moments in two hours can be the most impactful image.”

Sandy says everyone has a story to tell and she wants to tell those stories using the tool of communication that has served her so well — photography.