The Arts & Business Council of Greater Nashville, Blackbird Media, and F&M Bank have teamed up to present the Artist of the Week on The Nashville Sign. This week, Randy Purcell is featured! 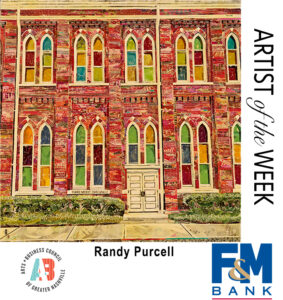 Randy is a Nashville-based artist who has exhibited in prestigious venues such as ArtFields, ArtPrize, Artclectic, Flying Solo at BNA, Dogwood Arts, and the Harding Art show. He is a founding member of the Nashville Collage Collective, Four Artist TN, and the Mystery Art League, and his work has appeared in publications like American Bee Journal, Nashville Voyager, Main Street Media, and The Tennessean as well as NPT’s Tennessee Crossroads.

His early interest in making furniture resulted in the creation of pieces of functional artwork including the Metro Arts Nashville “Bee-Cycle” bicycle rack and the ReTune Nashville effort to repurpose damaged musical instruments and equipment. Randy currently serves on the board of Number, Inc. (a publication on the art of the south), Turnip Green Creative Reuse, and L’Evate (a leadership organization in the Donelson/Hermitage/Old Hickory area. He holds a BFA in studio art from Middle Tennessee State University.

“I learned about Encaustic painting while enrolled at MTSU,” explained Purcell. “The one thing that stood out was the ability to transfer ink onto beeswax. I loved how this medium gave the transferred image a worn look and the color of the beeswax gave it a patina like nothing I could replicate with acrylics or oils.”

After years of experimentation with the ink-to-beeswax technique, Randy developed a personal style that mimics collage by transferring ink from magazines, creating a weathered patina to his work.

“I’m drawn to this process of choosing the magazine paper colors and textures and then cutting the pieces that build up the image,” he explained.

The process can be monotonous, but it allows him to get lost in his thoughts while creating. The result is an image that is recognizable while requiring further investigation by the viewer.