The Arts & Business Council, Blackbird Media, and F&M Bank have teamed up to present the Artist of the Week on The Nashville Sign. This week’s featured artist is Juliana Ericson. 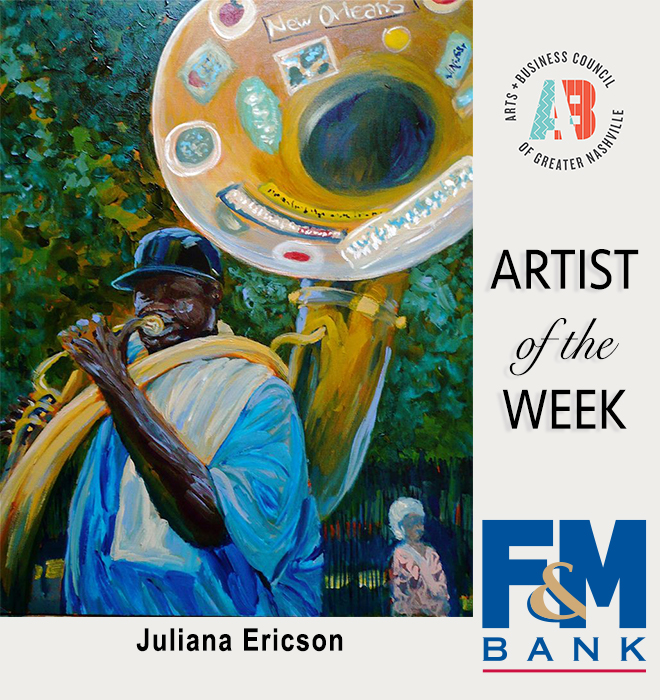 Juliana Ericson has been painting since childhood, and her Fauvist-influenced use of bold, vibrant colors has made her a popular artist in the area. Though self-taught, she’s studied with artists such as Randy Moberg, Hazel King, Larry Blovitz and Joel Knapp and was voted Nashville Scene’s “Best of Nashville Visual Artist” in 2006. Juliana also uses her talents to support art programs in public schools and to help children in need.

Regarding her work, Ericson says, “Everything is flowing all the time in constant motion. I’m interested in how this energy flows and I like to paint it as it appears to me in my mind.”

“I interpret the movement and the flow of the world I see, sometimes in more vibrant color than others see,” she continued. “Joy. That’s the purpose of my art: For me to enjoy painting and for the observer to enjoy my art.”

Juliana’s had several solo shows in Nashville including shows at Cheekwood, Madison Community Center and the Hendersonville Arts Council (now Monthaven Arts & Cultural Center). She’s shown in the Central South show, Arts at the Airport (BNA), and ArtClectic, and her work has been featured in shows and auctions for the Nashville Opera Society, Cheekwood, Bethlehem Center, Junior League of Hendersonville, Tennessee Environmental Council, and the Ensworth School. She was previously a board member of the Tennessee Art Guild, member of the National Association of Women Artists in NYC, member of the Chestnut Group Plein Air Painters, and commissioner for the Metro Nashville Arts Commission.

Her work is owned by private and corporate collectors in the United States, France, Sweden, Norway and England.